After posting the photo of Mr. Chess Classic Mainz, I started to wonder if there were any photos relevant to chess960. I found a few from a tournament in Andorra ('Uploaded on June 27, 2009'). 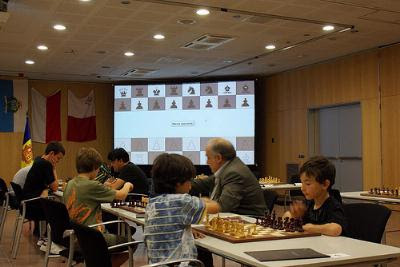 The large display shows the start position (SP879: QRKRNNBB). On the board in the foreground White has just played 1.g3, while the players on the next board are still setting up the pieces.

While working on the latest biweekly chess photo for my main blog (see Posts with label Photos++), I found a nice shot of the man behind Chess Classic Mainz (CCM). 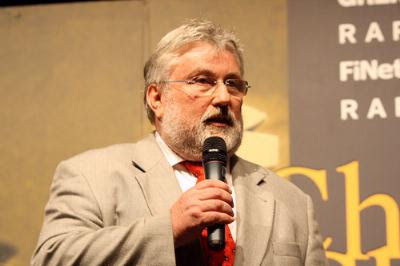 Follow that Flickr link for a set of CCM 2009 photos, although none are for chess960. There is a photo of the winner of the 2009 CCM Chess960 Open at GM Grischuk, 'thinking on the starting position of chess960', but I can't copy it because it's marked 'All rights reserved'.

In GMs vs. 2100-2200 (I), I noted that the GMs were more consistent in their choice of first moves (see that original post for the background of my 'experiment') and wondered if it was a random result. I repeated the experiment on the games from the top ten boards of the first round of the 2008 Mainz Chess960 Open and produced the following chart.

It again appears that the GMs were more consistent in their choice of first move. Four of the five games with the GMs as White started 1.c4, which was not chosen by any of the lower rated players as White. Are the GMs using some kind of chess logic which escapes the others?

[It should be mentioned that the software I'm using to produce the diagram doesn't handle chess960 castling. That's why some variations end as soon as one side has castled.]

Here's a little experiment combining the idea from How Top Players Treat the Same Chess960 Position with Tartakower and Chess960, where I looked at an early round game in an Swiss-style open event between a strong player and a less accomplished player. For this present post I took the games from the top ten boards of the first round of the 2009 Mainz Chess960 Open (see CCM9: Nakamura, Grischuk, and Rybka; in each round of Mainz, all players start with the same position), where some of the world's top GMs faced opponents rated around 2100-2200. The GMs won all of the games.

The following chart shows the first moves by all players. In the notes I've given the names of the GMs, but named their opponents 'NN'. This is not through lack of respect for the lower rated players, but to keep the chart easier to read.

What does this prove? The GMs were more consistent in their choice of first moves, but I'm not sure if this is a random result. Experiment to be repeated.

In my previous post -- Tartakower and Chess960 -- I used a game between a co-winner and an also-ran of the SchemingMind 2008 Chess960 Dropout Tournament (see that post for explanation and links). In this post I'll use a game between two of the strongest players in the event. In the last round both players were on the brink of elimination, making the game a better-to-win, but can't-lose for both. The game started 1.e4 e5 2.Nc3, and Black played a move that I simply don't understand, 2...Qg5, arriving at the diagrammed position.

The game continued 3.h4 Qh6 4.Nb3 Nc6 5.f3 Be7. Note that Black's last move threatened the lightly protected Pawn on h4. White could have played 6.Bf2 or 6.g3, but tried instead the surprising 6.Qe2. After Black took the loose Pawn with 6...Bxh4+, White played the equally surprising 7.Kd1, forfeiting the right to castle.

Now the game entered a long phase where White attacked on the Queenside (to use the familiar terminology of traditional chess), while Black worked to unscramble the misplaced pieces on the Kingside. The full PGN game score, courtesy SchemingMind.com, is below.

The SchemingMind 2008 Chess960 Dropout Tournament finished recently and unlike the two previous years (see Pyramids and Dropouts for background) there was no clear winner. Of the eight players who managed to stay under the elimination threshold until the sixth and last round, four reached the threshold without exceeding it and were declared co-winners.

The following miniature, between one of the co-winners and the event's tournament director, was played in round two. White's first move was 1.Nb3. While there is nothing wrong with this move, which develops the corner Knight to its natural square, it does nothing to stake a claim in the center. The moves 1.d4 and 1.c4, restricting Black's responses, were stronger.

Black continued 1...c5, preparing the development of three pieces and establishing a toehold in the center. White's best move was probably 2.c4, avoiding the subsequent embarrassment of the developed Knight. Instead White played 2.d4, reaching the diagram and handing the initiative to Black.

Commenting later on White's 4.Nxb7, Black repeated a quip from Tartakower that was new to me: 'Never capture on b7, even when it's a good move!' Is it strange that it should also apply to chess960?

Continuing with Finding Games by Good Chess960 Players, I looked at some of the games played by Chess.com's highest rated chess960 players. The following position arose after two moves in a game between the current highest rated player (name 'John Doe') and his 'Best Win' (i.e. win over highest rated opponent).

It's a definite candidate for Extravagant Openings in Chess960.
Here's the PGN game score.

Compare the PGN against the other examples I listed in Chess960 PGN.

Here's a useful tip from Study 960 Games. Although it's on the Chess.com/forum, the technique might apply to other online play sites.

Q: Is there any easy way to find 960 games to study? I thought I might look through some tournament games but there doesn't appear to be a way to search for just 960 games.

A: Go to view players with the highest 960 rating then look at their games.

I didn't know how to find the list of top rated players on Chess.com, but after a few minutes worked out the following: Results for players rated over "2000" and rated under "2800". There might be an easier way, but the query works nicely. The chart indicates that the average chess960 rating is about 1200.

What's the Capital of Rhineland-Palatinate?

+ Related posts on old blog: Chess for All Ages

While working on today's post -- which is now tomorrow's post, since today's post is the one you're reading -- I ran a routine query looking for keywords on a domain:-

...where the results had nothing to do with the query, but showed descriptions from other pages that do match the query. The same thing happened using the 'Search This Blog' widget on the Chess for All Ages blog. Ditto for other search terms. I can't remember a Google search ever performing so poorly.

What was the name of that Microsoft service? Bing! It's an awful name, conjuring up all sorts of associations that have nothing to do with web search, but I think I'll give it a try.

More weirdness: Today's date in YYYYMMDD format -- '20100102' -- is a numerical palindrome. When was the last time that happened?