A World Class Match and Some Top-level Games

Before continuing the previous post, Two Important Chess.com Events, let's go back to Three Chess960 Developments to Watch (October 2017), where I noted,

In February 2018, there may be an unusual exhibition match held between Magnus Carlsen and Hikaru Nakamura, playing chess960 (also known as Fischer Random).

The match will be played in Henie Onstad kunstsenter, at Høvikodden outside Oslo in Norway, from February 9 to February 13 2018. The match will include a total of 16 games. The first eight games are played like slow rapid chess with 45 minutes for the first 40 moves and then 15 minutes for the rest of the game, no increment. The last eight games are played as fast rapid chess with 10 minutes and 5 seconds incremental for each move. All 16 games will be played even if the match is decided. Games will not be rated.

Start positions will be chosen just before a pair of games, for example:-

For the slow rapid games, set up of the pieces will be decided by a drawing made by computer with both players present 15 minutes before the start of the game. This set up then will be used for both games of that evening.

Back to 'Two Chess.com Events', I located the games for the 'Speed Chess Championship' using the technique documented in GM Blitz Battle PGN (March 2017), and created a PGN file that is available here:-

I had a number of unexpected problems to create and upload the file, but hope that it is usable. The PGN header tags are not the same as they were for the March 2017 upload and I'm not sure whether the Chess.com format changed or my manipulations created differences.

As for the Chess.com 'Chess960 Championship', a preliminary analysis counted 372 games in the PGN file provided by Chess.com. I wanted to look at the file in more depth, but ran out of time.

Looking again at the upcoming Carlsen - Nakamura 'Unofficial World Championship', the two players met in the final match for both the 2016 GM Blitz Battle and the 2017 Speed Chess Championship. Although Carlsen won both matches, Nakamura won the chess960 minimatches with identical scores: +2-0=1. Nakamura appears to be the stronger player at chess960. 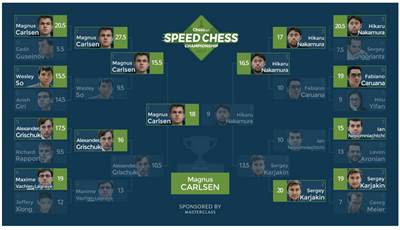