A couple of weeks ago, in Chess960 Tournaments Are Rare Birds, I mentioned a Nakamura - Movsesian chess960 exhibition match in Slovakia. TWIC had more info in no.820:

18) Nakamura vs Movsesian Blitz, Chess960 and Living Chess • Hikaru Nakamura was in Banska Stiavnica on the 16th July 2010 to play a one day series of games against Sergei Movsesian which took place alongside the International Championship of Slovakia covered last week. Nakamura won both Chess960 games and a Blitz game before drawing a game of Living Chess where both sides were playing blindfold which was drawn. • Official site: www.livechess.sk/en/

Here's a photo from the official site taken just before the start of the first game. 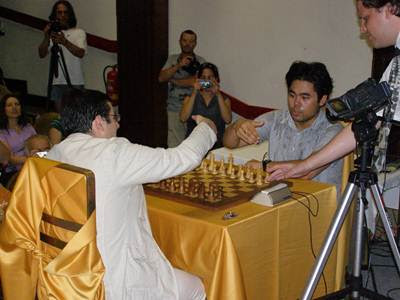 And here are PGN game scores that I transcribed from the moves of the 'live games' on the same site.

After I take a closer look at the games, I'll examine one in a future post.

In Castling Misjudged, I showed how an error in judgement led to a loss in one game of SchemingMind.com's 2009 Chess960 Dropout Tournament. The other game I lost, which was enough to eliminate me from the event, was also due to an error in judgement, although of a different kind.

Note the symmetry in the diagrammed position. It was even more striking before Black's last move, 16...Rcd8, when the move 16...Bb7 would have achieved perfect symmetry.

The primary tactical consideration for both sides is the sequence starting Nxd5 (or ...Nxd4 for Black), followed by advancing the e-Pawn two squares after the capture. I decided that 17.Nxd5 was premature and played 17.Rfd1 instead, judging that 17...Nxd4 was also premature. My opponent decided otherwise, played that move, and ended up with a long-lasting initiative that eventually netted a Pawn. Here's the full game score, courtesy SchemingMind.com.

How could the better developed side end up tactically worse in a symmetrical position? That is a question for which I have no answer.

It seems like ages ago when, in Pyramids and Dropouts, I described the format of SchemingMind.com's Dropout Tournaments. Whether you call it a dropout or a knockout, the end result is the same. You get zero points for a win, one point for a draw, and three points for a loss. Once you've amassed six points, you're out. The format of two games per round means you can be eliminated with two losses in the same round. Even if you go the distance of six rounds, a score of six wins and six draws (+6-0=6) means you just barely survived.

In my first SchemingMind dropout, I survived until the fifth round. I managed to get through the first four rounds with three draws (+5-0=3), but then crashed and burned in both fifth round games. Here's one of those two losses.

As Black in the diagrammed position I was feeling comfortable with my game. Although by playing ...g5 and ...g4, I had forgone the possibility of castling ...O-O, I was happy to play 12...O-O-O. I reasoned: (1) that my King was better on the Queenside than White's King would be on that side, and (2) that White's castling O-O would leave the Queen out of play on h1 with the King exposed to a Pawn thrust.

When White played 13.O-O, I realized that my reasoning was faulty. If the castled position gets too hot, the King can move to h2, releasing the Queen for action along the first rank. The Pawns on g3 and h4 will provide adequate shelter while White plays against the loose position of the Black King. I continued 13...f5, but was unable to work up any real threats against the White King. Meanwhile my own King fell under the crossfire of White's pieces. Here's the full game score.

Even after losing material I continued to play, hoping to find a defense based on the opposite colored Bishops. I finally had to admit that it was a mirage and resigned.

While writing yesterday's post on Special Chess960 Dice, which were used for a side event of the 2010 Canadian Open at Toronto (for more about the event see the press release for the Canadian Open Chess Championship), I noted that the Shabalov simul was the only chess960 event taking place during the Open. In 2010, chess960 tournaments are rare birds and it's worth mentioning a few others I've discovered.

If you know of game scores for these events, or if you know about other chess960 events that I've overlooked, add a comment or send me an email at the address listed under my profile. And thanks!

While browsing YouTube videos for my most recent post in the Video Friday series (see 1993 Kasparov - Short on BBC for the video I eventually selected), I watched the first few minutes of 2010 Canadian Open Chess Championship Day 3+4, and was pleased to see that it was about a Shabalov chess960 simul at the Canadian event. Even more intriguing was a set of unusual dice used to select a different start position for each game in the simul. The dice are shown in the following screen capture from the video. Using normal six-sided dice (where in fact only one 'die' is needed) to generate a chess960 start position is standard practice, and I once described the procedure in a post titled A Database of Chess960 Start Positions. The difference with the dice pictured above is that, rather than generate the start squares for each piece one at a time, the chess960 dice generate the start squares for all pieces at the same time. The five chess960 dice appear to be of three varieties:

While I can't make out the details on each die in the photo, I can see that the blue & white dice are both marked with a Bishop, and the green die is marked with a Knight. If the red and yellow dice are marked respectively with a Queen and a Knight (it could be the other way around, which also works), and if each side of all the dice is marked with a number (as appears to be the case with the green die: the numbers 5, 1, & 2 are visible), then we have all the information necessary to generate a chess960 start position:

As for which face of the die to use for placement, I suppose it has to be the side which is face down. A web search turned up a related page -- Canadian Open Chess Championship half-way through -- which confirmed,

On Monday American GM Shabalov gave a simultaneous exhibit of Chess960 on 13 boards. The game similar to Fischer random chess (except that there is traditional castling) invented by American World Champion Bobby Fischer rearranges the starting pieces to avoid memorization of the opening moves. There are 960 different starting positions. Special dice were made for this event to generate the starting position. Players have to think from move 1. Shabalov said it was the hardest simultaneous he has ever given. Shabalov won 10 tied 3, had a lunch break, gave a lecture then played a 4-hour slow game in the tournament. (marketwire.com)

The accuracy of the phrase 'The game similar to Fischer random chess (except that there is traditional castling)' is questionable, because chess960 and Fischer Random Chess are one and the same thing. But who cares! The simul and the dice are two more steps in promoting chess960, the most significant evolution of chess in 500 years.

Since my post on the DGT960 Chess Clock was more about the video than about the clock itself, I decided to find out more about the clock. The DGT Home Page (digitalgametechnology.com) seemed like a good place to start, but it uses the 'mystery meat' style of navigation where you have to know how the page works before you can go anywhere else.

The only mention of chess960 is on the navigation bar at the top of the page, which leads offsite and which doesn't appear to have been updated in two years. If you're patient, the clock will eventually appear in one of the blurbs that rotate through 'DGT Headlines'. There's also an unlabelled picture of the DGT960 (Hint: It's a folding clock with orange as a dominant color) that leads to the main page on the product: DGT960.

These days I suppose that being found in the search engines is more important than internal site navigation, and Google reveals several other interesting pages on the DGT site. First, there is a collection of the same YouTube videos I flagged in my original post on the DGT960: How to operate the DGT960. Then there is the product's user manual: DGT960 User Manual (English). Finally, a page announcing The NEW Chess960 Ambassadors! ('Miss Bianca Muhren and Mr Dennis de Vreugt are the new Chess960 Ambassadors') leads to the same chess960 offsite page I mentioned earlier: DGT Chess960!.

Disclaimer: While I haven't used the DGT960 myself, I have used and written reviews on other DGT products: Two Digital Clocks from DGT and Review of the DGT 2010 Digital Chess Clock. They were all top quality clocks. I can't imagine buying the DGT960 solely for the chess960 functions, but I will definitely consider it if I ever buy a new chess clock.

'♫ We're having a heat wave, a tropical heat wave ♫', my attic office is even hotter than it normally is, and the last thing I want to do is write a complicated post requiring all sorts of detailed analysis. That means it's time for a video, where the hard work has already been done by the video maker. In this case the video is about the DGT960 clock, narrated, if I'm not mistaken, by Albert Vasse of DGT.

DGT960 Chess Starting Position Generator (4:11) • 'The DGT960 can random generate one of the starting positions of chess960, also known as Fischer Random Chess.'

The first sequence in the video shows the start position of a traditional chess game (SP518 RNBQKBNR), where you can see the graphics used to denote individual pieces. Then it goes on to explain how you can select a position randomly...

Every time I push this button there will be a number between 1 and 960. [The display shows the number 466.] With this number there is a starting position. In this case it means BRNNKBRQ. (1:30 into the clip)

...select a numeric start position yourself...

...or enter a start position by setting up the pieces on specific start squares.

This quibble aside, the DGT960 performs a valuable service to the chess960 community. See the end of the clip for related videos explaining other DGT960 functionality common to chess clocks in general.

In yesterday's post, Chess960 Instructional Videos, I featured a Chess.com video by FM Charles Galofre. I discovered afterwards that Galofre released a few chess960 videos on YouTube before making them for Chess.com. Here's the first.

The clip he mentions is Real Men Play Chess, which has nothing to do with chess960. As for real men and chess960, the description continued,

The position displayed at the beginning looks a lot like a successful attack for Black in a King Indian's Defense, until you realize that White, at the top of the screen, has just checkmated Black. A new game (SP032 BBNNQRKR) starts at 3:45 into the clip. • For more in the series, see YouTube - CharlesGalofre's Channel, and search 'chess960'. At the present time, there are five clips.

It's been a few months since my last post with label Video and in the meantime several video makers have produced instructional videos for chess960. Here's a recent one from Chess.com (SP917 RKBBRQNN).

As he gains experience, Charles also finds a way to apply some important "classic chess" principals like development, central control, and even castling! His perspective and understanding, as he puts it, is "maturing". Take a look at these entertaining games, and see if you too can increase your Chess960 skills

For the moment, there are only two clips in the series and I suppose adding more will depend on their popularity. For both videos see Chess Video Lesson Library - FM Charles Galofre.