A few weeks ago, in Kings and Queens on Chess960, I mentioned that the December 2011 issue of Chess Life included a number of annotated chess960 games. In fact there were six, covering all of the five start positions used in the St.Louis event except the first round. Since I already covered games from the first two rounds in 'Fianchetto the Light Squared Bishop' and 'A Tempo and a Half in a Symmetrical Position', let's look at the start of a game from the third round. The initial position is shown in the diagram below.

If you had the White pieces, what would you play? The moves 1.c4 and 1.f4, to develop the Bishops that are awkwardly placed on b1 and g1, suggest themselves. If 1.f4, Black has 1...c5 attacking the f-Pawn, which can not be efficiently defended. If 1.c4, the move 1...f5 doesn't have the same effect, because 2.b3 both defends the c-Pawn and opens the long diagonal for the Queen. The moves 1.d4 and 1.e4 also look plausible. On balance, I prefer 1.d4, which makes the square d3 attractive for either Knight. The move 1.e4 addresses the center, but doesn't develop any pieces.

As for castling, castles O-O looks more likely, since only the dark-squared Bishop needs to get out of the way. Castles O-O-O is possible after both Knights have moved, but some other Pawn moves on that side will be required to develop the Queen and light-squared Bishop. Those moves will weaken the castled position.

What did the Kings and Queens of St.Louis play? Three of them, including the experienced chess960 players Kosteniuk and Lahno, chose 1.c4. One chose 1.d4, and Irina Krush, who annotated the game for CL, chose 1.e4. Her opponent selected 1...c5, and the game continued 2.f3 b6 3.d4. On 2.f3, Krush noted,

I didn't see any other future for the Bg1, and the e4-pawn will need protection soon. But I was sad to take away the f3-square from the knight, especially as [my coach] has scolded me about doing that before!

Indeed, the Knights are also awkwardly placed. They are both competing for the same d-square, while Nb3 (or Nb6) interferes with the best development of the Queen. One of them will probably first go to its second rank.

That's typical of chess960. The pieces are seldom placed as harmoniously as in the traditional start position and their individual developments involve tradeoffs. Both players are grappling with the same difficulties, the only difference being that one of them goes first. Then it's a continuous balance of pursuing one's own plan while keeping an eye on the opponent's.

Here's a chess960 miniature that was played recently on SchemingMind.com. The player of the White pieces was rated in the 2200s, about 400 points above his opponent, and the start position was SP931 BRKRNQNB, as can be clearly seen in the first diagram.

The most pronounced characteristics of the position are the Bishops in the corners and the compact Rook-King-Rook formation. I once discussed the Bishop formation in a post Four Cornered Bishops. White's first move 1.e4 blocks the long a8-h1 diagonal, so the light squared Bishop can be developed without being exchanged immediately.

Black has a choice of initial responses, starting with the advance of the b- or g-Pawns either one or two squares. I always find this choice difficult to make. In the current position, it's worth noting that the Queenside Bishop (a-side for the purists) is protected, while the Kingside Bishop isn't. If Black doesn't advance the g-Pawn immediately, White can advance the b-Pawn on the second move, rendering the Black g-Pawn immobile for the near future. That might be why Black chose 1...g6. The advance of the e-Pawn one or two squares was another option.

White continued 2.f4, grabbing another piece of the center and preparing to develop one of the Knights to f3. Black noticed that the h-Pawns are unprotected and played 2...Qh6, attacking the Pawn on h2. If White defends with a Knight to f3, the f-Pawn is left en prise to the Black Queen. I don't like the move 2...Qh6, and would have given more consideration to 2...b6 and 2...b5. That choice illustrates a common tradeoff: the move 2...b6 preserves the option to castle O-O-O, but is more passive than the aggressive 2...b5, which itself has the disadvantage of rendering ...O-O-O problematic. Since ...O-O-O is already awkward because of the Rook on d8, it might be better to plan for an eventual ...O-O, by playing 2...b5.

Now White played 3.e5, taking the squares d6 and f6 from the Black Knights, and daring Black to capture the h-Pawn. This is exactly what happened with 3...Qxh2, bringing us to the second diagram.

Although Black has an extra Pawn, the Black Queen is separated from its own forces and doesn't have an easy path back to them. White answered 4.Ne2, protecting both the f-Pawn and the Bishop on h1. The game continued 4...b6 5.b4 f5, where Black's last move is very hard to understand, since it develops nothing. Was Black trying to prepare protection for the Queen on g4?

Black's position was further weakened after 6.Nf3 (attacking the Queen) 6...Bxf3. The exchange of the Bishop for the Knight defends the Queen, but seriously weakens the light squares on Black's Queenside. After 7.Qxf3, Black tried to swap Queens with 7...Qh5, and must have been surprised to see 8.g4. White not only avoids the Queen exchange, but also attacks the Black Queen and opens the long diagonal for the light squared Bishop, taking direct aim at Black's King. Now if 8...fxg4, White continues 9.Qa3, with a winning Queenside attack. Instead Black tried 8...Qxg4, but after 9.Qd3, Black either gets mated or loses the Queen to 10.Bf3 Qh4 11.Rh1.

A chess960 player can sometimes consider the early development of the Queen to a square considered dangerous in traditional chess. In this game it wasn't a good idea.

In my previous post, Kings and Queens on Chess960, I quoted from IM Irina Krush, who both played in the St.Louis event and covered it for Chess Life. After presenting her thoughts as a newcomer to chess960, she discussed the preparation she undertook for the event. Mixed in with her account of her training procedure were a number of insights into chess960 specifics. For example:-

The thinking starts immediately on move one. • Until the game crystallizes into a normal looking chess position, evaluation is a much harder task; the difficulty stems from the fact that there are so many more variables to keep in mind, and they’re in a less fixed state. • It's so tempting to just play in moves, of course with some ideas, but not necessarily a grand construction for the whole position. • You need to fight for the center. • It is definitely a challenge to avoid poorly placed pieces. • Black should generally avoid symmetry. [...] There will definitely be cases where symmetry is fine or even the best option, but in many positions, Black can do better by forging his own path. • Bishops in the center of the board (i.e., d1 or e1) are not actually "undeveloped" pieces and I don’t have to give them first priority in development ... of course, knights in the corners tend to come out early. • I found it hard to find the right balance; I tended to play either too passively or too aggressively.

Some of Krush's advice seems obvious ('thinking starts on move one'; 'need to fight for the center'), some not at all obvious ('Black should generally avoid symmetry'; 'Bishops [that start] in the center are not "undeveloped"'). I'll keep her tips in mind for future posts.

Kings and Queens on Chess960 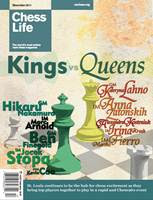 A few months ago I covered the St.Louis Kings vs. Queens Tournament in a series of four consecutive posts starting with Chess960 Kings and Queens. Chess960 interest being what it is, I wasn't expecting to see much about that half of the event in the mainstream chess press, so you can imagine my surprise when it was featured in not one, but both, of the magazines I read monthly.

First it was mentioned in the November 2011 issue of Europe Echecs ('Rois Contre Reines', p.24), where GM Kateryna Lahno, one of the players for 'Les Reines', annotated her round two game against IM Marc Arnold of 'Les Rois'. We've already encountered Lahno in a couple of posts from 2010 -- Women, Chess960, and Video and More Women, Chess960, and Video -- on the women's chess960 event at Mainz 2008, but it's also worth noting that one of her games from that event, an annotated loss to GM Alexandra Kosteniuk, appeared in the October 2008 edition of Europe Echecs (p.44).

A month after the 'Rois Contre Reines' piece, the St.Louis event got a 12-page spread in the December 2011 issue of Chess Life (cover by Shirley Szymanek pictured in the corner), where most of the writeup by IM Irina Krush and all of the annotated games covered the chess960 action. Of her own participation, Krush had this to say (p.21):-

Up until July 2011, I'd never played a Fischer Random game, nor did I know the rules. I got my first taste of it at the 2011 Canadian Open, which had a Fischer Random side event that I eagerly attended with the aim of getting some practice for St. Louis. I played two games against Bulgarian GM Dejan Bojkov, winning with white and losing with black (pathetically, in 14 moves.) I didn't know if I'd like Fischer Random, but I loved it!

In Fischer Random, the thinking starts immediately on move one. There are no well-worn paths to follow; you're the first to reach the frontier ... and just as life on the frontier is dangerous and uncertain, so is the situation on the 64 squares.

Her co-author, GM Ben Finegold, provided most of the annotations and was quoted on his own participation.

Here is what Ben, who scored an amazing 5/5 in the Fischer Random and finished second in the event overall, had to say about his thoughts going in:

"I was quite worried about playing Chess960, since I had no experience. To prepare, I played about eight games on the Internet Chess Club in the week leading up to the event. I won them all, but my opposition was rated about 1500, and the games were not impressive. The best advice I got was from World Champion Vishy Anand. When I asked Anand how to prepare for the games, he simply said, "You cannot prepare for Chess960." This gave me some confidence that I could do no wrong in my prep!

"I spoke to [GM Hikaru Nakamura ] briefly about strategy, since Hikaru is not only a great chess player, but possibly an even better Chess960 player! Hikaru said to play in the center and activate your pieces (just like regular chess!). Hikaru also was able to score 5-0 in the Chess960 games. He played extremely quickly in the Chess960 games and seemed to feel at home, somehow."

And Ben's feelings about Fischer Random after the event?

Let's have that again: 'I didn't know if I'd like Fischer Random, but I loved it!', and 'Which did I enjoy more? In hindsight, the Fischer Random ... not what I expected to say'. For my next post on this blog, I'll come back to the games.