This week I announced on my main blog that I'm Gone Fishing, at least for a few weeks. I don't have the time for a proper chess960 post either. What to blog about? My tried-and-true method is to use a picture. The only problem is that chess960 doesn't lend itself to easy imagery. While I was scrolling Google Images, looking for an idea, I noticed the following. 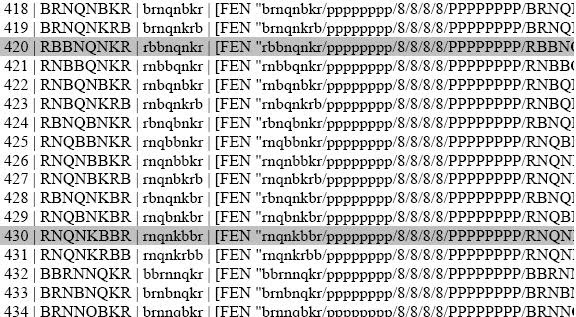 'That looks familiar', I thought, then compared it with my file c960strt.zip, available under 'RESOURCES: SPs & Twins' on the right sidebar.

The snippet in the image is indeed identical to the equivalent portion of my own file. The file was originally prepared more than five years ago for my main blog, documented in another blog post, A Database of Chess960 Start Positions.

It turns out that the file is being sold as a PDF from a page whose image I've captured on the left. Another snippet of the file is visible in the upper left corner of the page's body. The page is titled Chess book Fischer Randon chess 960 chess960 FRC Fischerandom | ChessCreator.com. ('Fischer Randon'?), and the book lists for 'Price: $1.99', marked down from $2.99.

The description starts, 'This is a 16 page reference e-book (PDF) featuring all possible Fischer Random chess 960 starting positions.' A 16-page book would have 60 chess960 positions per page in the book.

That last link points to the same 'Fischer Randon' page. It's hard to believe that chess960 is a popular product, but so it says. My own online copy of the file is downloaded by visitors less than once a day.

I don't mind someone giving away my material. I am, after all, giving it away myself. Charging for it is another matter. And how about some attribution?

Thinking Time Can Be a Guide

Continuing with Year-end News from LSS, here is the first game picked from the finals of the 1st LSS Chess960 Championships (2012). I tried to use the technique discussed in the previous post -- having an engine locate a position where the evaluation changes dramatically -- but it turned out to be most useful for middlegame and endgame positions. How to locate a critical opening position?

Since elapsed times from LSS games are recorded along with the moves, it occurred to me to use the players' thinking time in the opening to pinpoint positions that they found difficult. As I discussed in my first post about LSS, The Lechenicher SchachServer, the site uses the 'countdown time control', where each player starts with a fixed amount of time that is never augmented, similar to a sandglass timer. If a player uses more time than originally allocated, the game is lost on time forfeit. Reflection time is precious and shouldn't be squandered.

While there are many reasons a player might use more time for a single move, like having higher priorities for the moment than working on a chess game, elapsed time is still a useful guideline. The players were assigned SP144 BBNRNQKR for their two games with each other. In one game, after 1.c4 c5 2.b3, the position shown in the diagram was reached. Black spent a relatively large amount of time on the next move. What would you play?

Black, the higher rated player by about 200 points, played 2...e5. The move might seem surprising, since it creates a hole on d5, but it achieves two positional objectives:-

With the players castled, it's clear that Black has the better position. White's d-Pawn is backward on an open file and will be a problem for many moves. White kept finding counterplay, but was eventually overwhelmed and resigned on the 77th move, far behind on the clock along with a lost position.

Continuing with my copy of the LSS database, I identified games between players rated 2000 or more. Of the 7308 games on file, a little more than 100 games met this criteria. [...] The site now offers annual 'LSS Chess960 Championships', but the 2012 edition has only completed the preliminary stage, where there was just a single pairing of 2000+ players. We should see more games between top players as the semifinal and final stages complete.

In November, the 1st LSS Chess960 Championships (2012) finished with an unbreakable tie for first place, as shown in the following chart.

The co-winners, Valery Nemchenko and Marek Sadowski, tied their games with each other and had perfect scores against the two other players. Since the drawn games might lack tension, I looked instead at their games against the third-placed player, hoping to find one to use on this blog. I ran into two challenges.

The first challenge applies to correspondence chess games in general. There are so many dynamics in the course of a game between first class players, that it is almost a hopeless task for an outsider to dissect it intelligently. I decided to concentrate on a specific position in the chosen game. Which position to choose? The most instructive approach is to narrow the possibilities -- at one point the game is equal and at a later point the game is objectively lost. A critical position must lie somewhere between the two points.

The second challenge applies to chess960 games. In traditional chess, where we understand the start position and initial moves so well, we usually have a good sense of the dynamics as the game emerges from the opening. The play is either balanced or one side has an advantage. That gives us one of our two endpoints to search for a critical position. In chess960 we're never really sure which dynamics were in the start position (SP) and which were introduced by the players' moves. Engines aren't as much help here, because their opening evaluation heuristics are usually taken directly from traditional chess.

That is the main reason why I prefer analyzing chess960 openings on this blog. It's the phase of the game which is the most difficult for experienced players of traditional chess. Many chess960 middlegames and all endgames are better suited for my main blog.

Games, games, games; ultimately that's what chess960 is all about. In January, LSS released a new edition of the games database.

Over the next few weeks, I'll load those games into a database, perform some simple statistical analysis, and discuss the results. One idea just came to mind : identify SPs where an initial Pawn advance into the center looks problematic.

More 'Me and Bobby Fischer'

Thanks to a forum post on Schemingmind.com, Bobby Fischer about Fischer Random (works only if signed-in), I learned that the full version of the documentary 'Me and Bobby Fischer' is now on Youtube.

In two posts on this blog a few years ago, I transcribed the chess960 portions of this film: Fischer Compares Chess960 to Puffed Wheat and 'Me and Bobby Fischer' and Chess960. The Youtube description says 'part of a documentary', but with a length of 85 minutes, the clip must include most of the full version. • HT: Space, Schemingmind