From van Zuylen to Benko

In the previous post, An Alternative to a 'Boring, Mind-Draining Process', I discussed an article from the January 2020 Chess Life. The same article had a short sidebar titled 'What is Fischer Random Chess?', which started,

Fischer Random Chess was publicized by the 11th World Champion, Bobby Fischer, in Buenos Aires in 1996. The foundation of Fischer Random chess had been laid two centuries earlier by Philip Julius van Zuylen van Nijevelt as a means of combating expanding opening theory, requiring players to rely on creativity rather than rote memorization and repetition.

We've seen van Zuylen once before in this blog -- More Arguments Against Chess960 (April 2010) -- where Dutch writer Tim Krabbé placed van Zuylen's idea on an equal footing with Fischer's idea. In fact, the two ideas have as much in common as an acorn has to an oak tree. Van Zuylen shuffled the pieces on the rank behind the Pawns, not even taking care to place the Bishops on different colored squares. It's an interesting idea, but it's not particularly difficult to imagine. Fischer invented a castling scheme that was comprehensive enough to make the rules governing the traditional start position (SP518 RNBQKBNR) a subset of his own invention. The intellectual leap between the simple shuffling and the complex castling was a real feat of imagination.

For more about van Zuylen, see Philip Julius van Zuylen van Nijevelt (wikipedia.org). That page includes a link to van Zuylen's book, written in French, where the shuffling idea was introduced. I haven't had time to study the book, but another page, La Superiorite Aux Echecs: The first chess book of endgame theory by van Zuylen van Nyevelt (chess.com/blog/introuble2), makes it clear that shuffle chess represents only a miniscule portion of its total content.

Jumping from the 18th century to the 20th century, the November 1978 Chess Life (CL; p.609) had a pair of articles on shuffle chess. The introduction to the first article, showing the opposing pieces in a strategic huddle, is pictured below.

About ten years ago someone told me of another idea, which he said had come originally from Soviet grandmaster David Bronstein, certainly one of the most original thinkers in chess The idea is to begin with the sixteen pawns set up as usual, but with no pieces on the board. White's first move is to set any one of his pieces on any square along his first rank. Black then places any of his pieces anywhere on his own first rank.

Play alternates, each player placing another piece on his first rank. No piece or pawn may be moved until all the pieces of both sides are in place. To keep the game as close as possible to orthodox chess, Bishops must be placed on opposite-color squares and castling is permitted only if the King is on "K1" and at least one Rook is on a corner square.

That's certainly more sophisticated than van Zuylen's acorn, although still far from Fischer's oak tree. The rest of Benko's article was about a four game 'pre-chess' match with GM Arthur Bisguier. It was followed immediately by the second CL article, titled 'Pre-chess : For the Thinking Player' by GM Bisguier, who won the match. The two GMs' thoughts on their version of shuffle chess foreshadowed the thinking about chess960 more than two decades later. 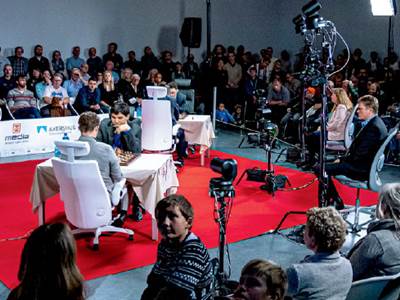