While browsing YouTube videos for my most recent post in the Video Friday series (see 1993 Kasparov - Short on BBC for the video I eventually selected), I watched the first few minutes of 2010 Canadian Open Chess Championship Day 3+4, and was pleased to see that it was about a Shabalov chess960 simul at the Canadian event. Even more intriguing was a set of unusual dice used to select a different start position for each game in the simul. The dice are shown in the following screen capture from the video. 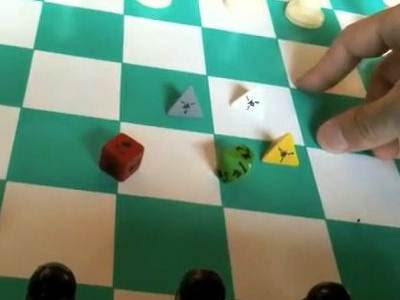 Using normal six-sided dice (where in fact only one 'die' is needed) to generate a chess960 start position is standard practice, and I once described the procedure in a post titled A Database of Chess960 Start Positions. The difference with the dice pictured above is that, rather than generate the start squares for each piece one at a time, the chess960 dice generate the start squares for all pieces at the same time. The five chess960 dice appear to be of three varieties:

While I can't make out the details on each die in the photo, I can see that the blue & white dice are both marked with a Bishop, and the green die is marked with a Knight. If the red and yellow dice are marked respectively with a Queen and a Knight (it could be the other way around, which also works), and if each side of all the dice is marked with a number (as appears to be the case with the green die: the numbers 5, 1, & 2 are visible), then we have all the information necessary to generate a chess960 start position:

As for which face of the die to use for placement, I suppose it has to be the side which is face down. A web search turned up a related page -- Canadian Open Chess Championship half-way through -- which confirmed,

On Monday American GM Shabalov gave a simultaneous exhibit of Chess960 on 13 boards. The game similar to Fischer random chess (except that there is traditional castling) invented by American World Champion Bobby Fischer rearranges the starting pieces to avoid memorization of the opening moves. There are 960 different starting positions. Special dice were made for this event to generate the starting position. Players have to think from move 1. Shabalov said it was the hardest simultaneous he has ever given. Shabalov won 10 tied 3, had a lunch break, gave a lecture then played a 4-hour slow game in the tournament. (marketwire.com)

The accuracy of the phrase 'The game similar to Fischer random chess (except that there is traditional castling)' is questionable, because chess960 and Fischer Random Chess are one and the same thing. But who cares! The simul and the dice are two more steps in promoting chess960, the most significant evolution of chess in 500 years.

The green die has ten sides. It is probably numbered one to five twice. I generally carry a four sided die, a five sided die, and a six sided die for creating FRC positions. I do it the way you explain, just one die at a time instead of all at once.

where do we get these dice--i looked on the internet & cannot find them 4 sale.