This past week I managed to watch a few hours of the 2022 FWFRCC group stage. I was amazed by the quality of the games and of the commentary. Unfortunately, I won't be able to write about the winner until the next scheduled post on this blog next month.

The official announcement of the winner -- 'Hikaru Nakamura is the 2022 FIDE World Fischer Random Champion' -- is shown below. 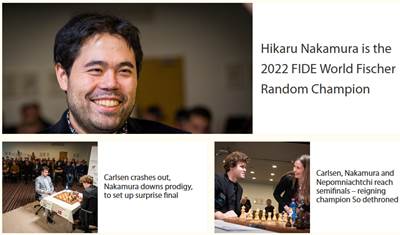 The event was covered by all of the major chess news sites. Let's follow the action on FIDE's own site. All of these stories, plus many more, are also available on the official site(s):-

GM Tisdall has emerged as one of the leading authorities on C960/FRC. For the previous post on this blog, see Chess960 Movers and Shakers (November 2020). As for GM Nakamura, he has been mentioned so many times on this blog that he deserves his own category. Since that's not likely to happen anytime soon, use the search box in the right navigation column. Congratulations on his impressive success in the 2022 FWFRCC!