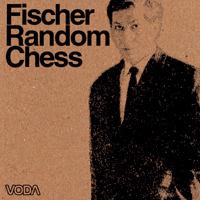 If you follow chess just a little bit you've undoubtedly heard of Chess (the musical) [from Wikipedia.org], but even if you're very keen on Fischer's last great creation, chess960, you've maybe never heard of Fischer Random Chess by Voda ('our new EP, self-produced'). The band's bio says, 'Voda’s only been on the Boston scene since 2007, but you wouldn’t know it to see them live. In the summer of 2008, Voda released Fischer Random Chess. It features the hard-charging live favorites "Come On" and "Bobby Fischer" as well as slow-burner "Rule 21", and "Cartoon Hero", a well-crafted piece of radio-ready pop.'

The track named after the 11th World Champion starts,

There's no sign that Voda really knows anything about chess960, but who cares? It's the music that counts.