A recent article in TechRepublic.com, The role of computers in planning chess strategy by Debra Littlejohn Shinder, received a fair share of attention from the chess blogosphere. That wasn't at all surprising, since it was about top-level tournament preparation.

Electronic assistance isn’t allowed during a conventional match, but that doesn’t mean chess champs can’t use digital devices when assessing the opponents they may encounter in a tournament and when plotting their strategies. Many chess players at the international tournament level now utilize the processing power of today’s powerful -- but much less costly -- computers to help them prepare for matches.

And specifically the preparation practiced by GM Hikaru Nakamura, one of the USA's top players. While informative and accurate overall, the piece contained at least one subtle blunder, shown in the following photo. 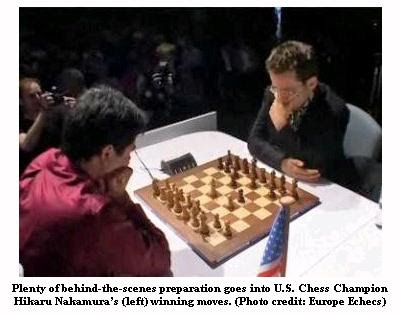 The caption says, 'Plenty of behind-the-scenes preparation goes into U.S. Chess Champion Hikaru Nakamura’s winning moves', but the board shows a chess960 position (SP190: NRNKRBBQ). You can bet your last dollar that Nakamura's only preparation was adjusting his pieces before the start of the game.

That game was the first in the Chess960 Rapid World Championship match between Nakamura and GM Levon Aronian (the other player in the photo) at last year's Chess Classic Mainz, a match won decisively by Nakamura. For more about the event, see my previous posts CCM9: Nakamura, Grischuk, and Rybka and More from Mainz 2009. Here is the PGN of the same game, courtesy Chess Tigers.

HT: Comment to The Role of Computers in Planning Chess Strategy (TheChessMind.net).