As long as I'm on the subject of chess960 history, seen in last week's Bobby Fischer in 1996 (May 2022), here's another blast from the past that I discovered recently. These links are all from Archive.org, returning material originally found on a Geocities.com site, 'The Realm of the Citadel':-

The pages aren't dated, so I've organized them by page name: Fischerandom1/-2/-6. The missing page numbers (-3/-4/-5) are about pairs of games from the match. The third pâge on my list of links (no.6) has a photo from the match, reproduced here. 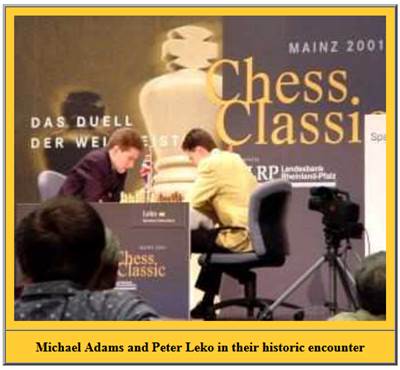 Those references date the match to June 2001, meaning the Geocities pages were written some time after that. The last page in the series (no.6) has a good summary of the situation at the time of the match.

Peter Leko and Michael Adams were chosen as the most logical choices to play for the first Fischer Random title. Both players are in the top five in the January 2001 world rankings joining former and current world champions Kasparov, Anand and Kramnik.

Today, nobody injects more new super novelties to the known theories than Peter Leko. Leko has actually played some Fischer Random games with the inventor of the game himself, Bobby Fischer, who as everyone knows happens to be his friend although he says he prefers to keep the memories to himself.

There's more to explore here, but I ran out of time.