The Origin of Castling in Chess

Along with the rule governing the initial position in chess, which I covered in two posts on The Origin and More, the other rule differentiating chess960 from chess is the rule governing castling. Where the chess960 rule for the initial position is designed to deliver a richer set of possibilities at the beginning of a game, the rule for castling is designed to steer the game back to positions which are more 'chesslike'.

Murray believed the rule for modern castling arose from the necessity to standardize the rules as players from different localities travelled to compete with each other in an 'even contest'. From his 'History of Chess' (p.811): 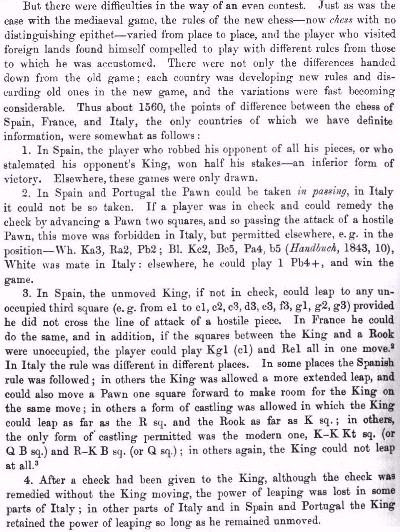 I've left the points about stalemate and en passant in the excerpt because Murray's four points are his complete account of the local differences in chess in the 16th century. It was also easier to leave them in than to take them out!