The Origin of the Initial Position in Chess

From Murray's 'History of Chess' (p.27; in the third line, the 'same conclusion' is that chess was first developed in India): 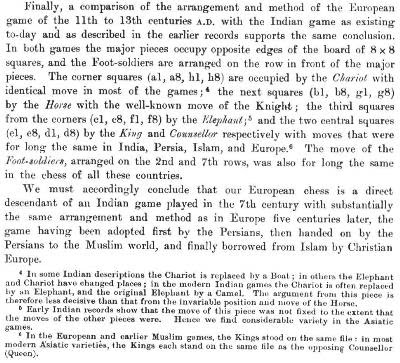 Sanskrit Chess. When the game first entered the pages of history, it was called chaturanga and was played in western India. Than, as now, the board was made up of 64 squres, eight by eight. The chessmen represented an Indian army and the name was derived from a Sanskrit word for 'army'. Chaturanga literally means 'four arms'. Chatur is Sanskrit for 'four' and is the ancestor of the Latin word quattor (visible in such English words as 'quartet'). The other half of the term, anga, meant 'arms', and it was in military Sanskrit precisely as we use it in military English. Thus we speak of the 'arms' of the service, meaning its components, such as infantry, cavalry, artillery, and so forth. These are the 'arms' (the very word 'army' has the same origin). The old Indian army was composed of four 'arms': chariots, elephants, cavalry, and infantry; and the word chaturanga meant 'the four arms', that is, the army as a whole.

In the battle line of the Sanskrit army, the chariots were posted on the flanks, while the king and his prime minister stationed themselves in the protected and important center of the line. The cavalry were also deployed on the flanks but nearer the center to permit fast wheeling-in movements. The lumbering elephants were stationed just off center. This is the traditional battle line of all armies -- and for that matter, of a football team, too. Speed on the flanks, power in the center. Finally the foot soldiers were ranked in the front line, then, as now, bearing the brunt of battle. Thus chaturanga was an effigy of a battle.

A little later, Davidson explained that the elephant was the ancestor of the Bishop. The title page of his book tells us that he was a 'Major, Medical Corps Reserve, United States Army', thereby putting his remarks into context.

The conclusion of both authors is that the initial position has carried over virtually unchanged from the 7th century A.D. Murray, however, gave no explanation for the sequence of the three pieces on the flanks. I'll come back to that point in another post.