More on the Initial Position in Chess

In Origin of the Initial Position in Chess, I reported the opinion of chess historians that the initial position in modern chess has its roots in the oldest known version of the game, Indian chaturanga. In the initial positions of both games, the Pawns occupy the second rank, the King and chief counsellor (the Queen in modern chess) occupy the center files, and the three other pieces are placed symmetrically on the flanks of the first rank.

Davidson speculated that the three flank pieces occupy their positions (RNBxxBNR) because that is the most efficient arrangement for an army. Murray, on the other hand, was not so sure ('History of Chess', p.46): 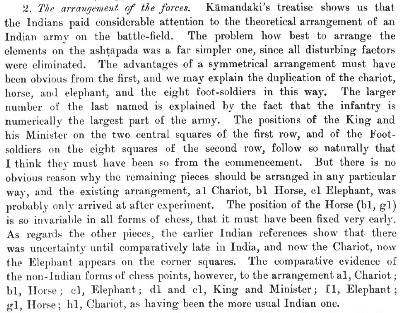 To emphasize Murray's central idea: 'There is no obvious reason why the remaining pieces should be arranged in any particular way, and the existing arrangement (RNB) was probably only arrived at after experiment'. In A Database of Chess960 Start Positions, I pointed out that there are only twelve symmetrical positions with the King and Queen in the center. Of these, there are six with the King on e1 and the Queen on d1.

The move of the modern Bishop wasn't developed until the late 1400s, and could not have been a factor in chaturanga. Experience with chess960, however, shows that when the Bishops start in the four corners, they are often exchanged quickly. I made another observation which might be relevant in Undefended Pawns in Chess960 Start Positions.

Taking SP518 (RNBQKBNR), the eight Pawns are defended in a pattern that looks like 1-1-1-4-4-1-1-1; the a/b/c and f/g/h Pawns are all defended exactly once, while the d/e Pawns are each defended four times. This symmetric result for SP518 is partly because the King and Queen protect the same number of Pawns from a particular start square. It turns out that there is only one other SP that has the same start profile as SP518, its 'twin' SP534 (RNBKQBNR), where the King and Queen swap places on the central squares.

[For a general discussion about the evolution of chess from chaturanga to the modern game, see The Origin of Chess.]

Later: Re the 'crosswise arrangement', on p.360 Murray gives the moves for a complete game where the Kings start on e1 and d8. White castles Kg1 and Re1; Black castles Kb8 and Rd8.