It was Quinteros who assisted him in 1971 to beat Petrosian; in 1972 he was in preparation and then assisted him in the World [Championship] in Iceland. He was also the one who accompanied him to most of the Open, to Las Vegas and three months to Taxco (Mexico) in 1982; to Paris in 1995 to draw up the Fischerandom contract that was launched with singular success on 16 June 1996 at the Pasaje Dardo Rocha in La Plata at the request of the then governor Eduardo Duhalde.

Even more important to the history of Fischer's invention, the article included a photo. It's reproduced below along with its translated caption. 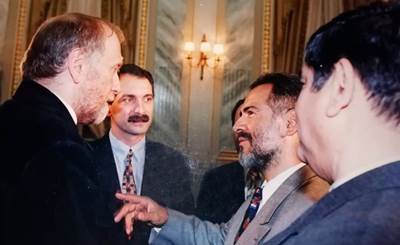 'Fischer with Quinteros in La Plata, in 1996. He had come to present the Fischeramdon [sic], a chess variant where the pieces (except the pawns) could be placed in the opening in a random way to demand the creativity of the players.'

GM Quinteros has appeared briefly on this blog before, the last time in the post Fischer and 'Wild Variant 22' (December 2013). That post is currently no.1 on 'Popular Posts (All time)' at the bottom of every page on this blog and often appears at the top of every page in 'Popular Posts (Last 7 Days)'. At some time in the past I discovered that it was not for its relevance to chess960, but rather for its discussion of the Fischer - Short ICC controversy in the early 2000s.

I never realized that GM Quinteros played a role in the early history of chess960/FRC. Perhaps that knowledge will lead to further historical discoveries.

Later: Re '[Quinteros] was also the one who accompanied [Fischer; ...] to Paris in 1995 to draw up the Fischerandom contract that was launched with singular success on 16 June 1996', I wrote, 'I don't understand the reference to Paris 1995'. I found three references in previous posts:-

I imagine that 'Paris in 1995' meant the meeting with Ilyumzhinov in December 1995. Fischer had one objective for the meeting: Fischerandom; Ilyumzhinov had another: getting Fischer to return to chess.